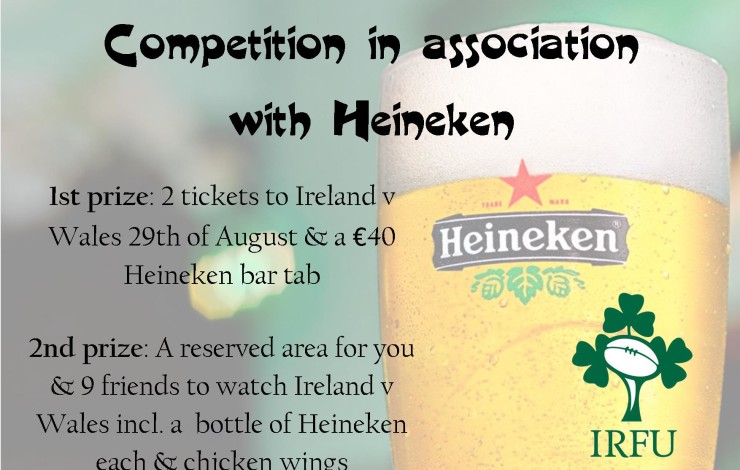 The Guinness Summer Series kicks off on the 8th of August when Ireland play Wales at The Millennium Stadium. Then we've got 2 home matches in the Aviva Stadium, Ireland v Scotland on the 15th of August & Ireland v Wales on the 29th of August, finishing off with England v Ireland at Twickenham.

Come watch the first 2 matches on our screens, we've just installed another large HDTV screen in the pub! And guess what, you have a chance of winning 2 tickets to the third match, Ireland v Wales. All you need to do is buy a pint of Heineken and fill out a card with your name & email address. First prize is 2 tickets to Ireland v Wales & a €40 Heineken bar tab (that will include Heineken, Moretti, Tiger, Orchard Thieves & Paulaner) and the second prize is an area for you & 9 friends to watch the Ireland v Wales match with chicken wings & a bottle of Heineken each. Now that's not too shabby is it?

So join us for the month of rugby leading up to the Rugby World Cup and be in with a chance to win these fabulous prizes!