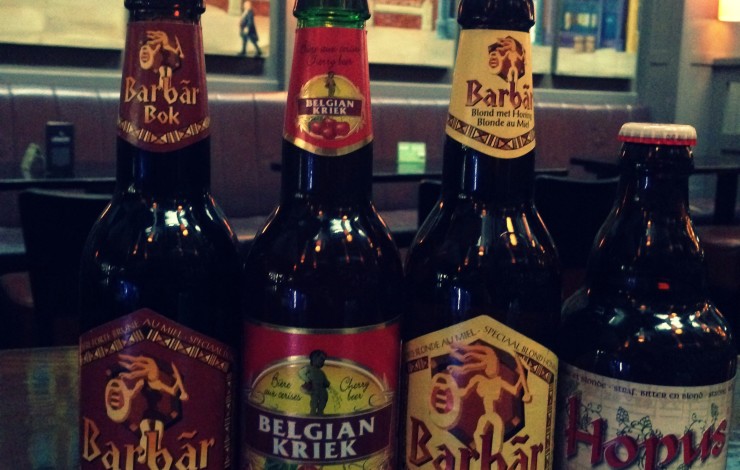 We are adding to our craft beer range here in The Waterloo Bar. The newest addition to our range is a couple of beers from the Belgian craft brewery Lefebvre. Lefebvre is an independent family-run brewery which has been running since 1876, so you could say that they have perfected their beers! We now stock Hopus, Barbar Blond, Barbar Bok & Belgian Kriek.

Hopus is a strong pale ale at 8.3%. Grassy, floral notes, along with gentle spicing, banana and bready malts.Despite having a lot of hops, it is not as hop-driven as you might expect. Defnitely one to try, but limit yourself to 1 or 2 as the alcohol content is quite high.

Barbar Blond another great beer, with a unique mixture of barley malts, hops & honey. You may think that it is going to be quite sweet with the honey in the beer but no... It balances out the acidity really well and makes it a very refreshing & soft beer.

Barbar Bok has similarities with the Barbar Blond (based on malts & honey) but this one has fruity, malty & chocolatey notes. It's a darker brown ale with chocolate flavours.

And then we have the Belgian Kriek, a cherry beer that is absolutely delicious. It is blended from white beer & cherry juice. A bit tangy at first but balanced out really well with a rich sweetness. A very refreshing beer (red in colour from the cherry juice) and at 3.5% you can treat yourself to a good few of these ones... I definitely see this one being a hit in the summer!

So if you are in the Dublin 4 area and want to try some great craft beers, pop in to us, we are just a few doors down from Tesco on Upper Baggot Street.